On A Dollar A Day

When I read about this book and the blog (I have linked to the old site because the new one is basically book promo), I was intrigued. I have been thinking about doing similar things (like living on an ultra thrifty food plan for a while, or trying to stay within the confines of the German welfare food allowance) but didn’t do it, for reasons I found confirmed in the book (mainly: I wouldn’t want to play havoc with my health). 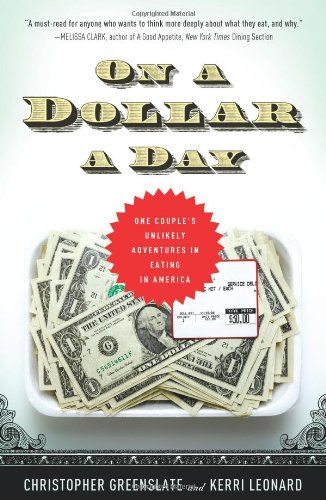 On a Dollar a Day: One Couple’s Unlikely Adventures in Eating in America

But even when reading the first paragraphs I had a feeling I was not going to like the book—for reasons utterly personal: I do have a problem with vegan evangelists, and about every third paragraph in the book seemed to stress a holier-than-thou oh-so-healthy-and-morally-superior vegan attitude.

Anyhow, I can tolerate different lifestyles, so I read on. Anyone who has been in the situation to have to stretch a budget when it comes to food (and who hasn’t?) knows that cheap starches are your only choice of putting more, but not necessarily healthier food on the table for the same few bucks. So I was waiting to read about their strategies and menu plans and healthy ideas. Instead, I found a lot of whining and complaining. Imagine, they couldn’t have their favorite Chocolate Soymilk Shake and 4-Dollar-Blackbean-Burritos anymore? How utterly unfair. And I felt like, c’mon folks, you gotta be kidding?

Actually, most of their ‚plan‘ was to do excessive couponing — a strategy pretty useless to me, since I live in a place where couponing isn’t done, and a bad one at that too, because you won’t get loss-leader produce and cheapo store brands by couponing. The 30 Dollar phase lasted only for a month, anyway, then the couple progressed to the US welfare and food stamp system (SNAP), giving them more money – and the USDA approved thrifty food plan.

The true strength of On a Dollar a Day

The couple discovered that living poor sucks and will leave you with bad food choices (and especially so if you are a vegan refusing to eat the little protein allowed on that plan). They were bored by cabbage and potatoes and oatmeal and a lack of spices and flavors. They also „found out“ that being poor and hungry makes you fatigued and you’ll lose weight if you’re malnourished. Well, who would have thought?

The political implications as well as the public view on poverty, feeding, and the nanny state notions that you just have to teach (poor) people how to eat right because they are dumb animals, are quite interesting and would have made for a book worth reading.

Unfortunately, the bickering between the partners and the constant whining about the hardness of their lives (cooking ahead and from scratch costs too much time? They’ve never heard of slow-cookers?) made this book a really unpleasant experience. On Amazon.com someone summed it up as

A good way to be thrifty is to save your money, and go read online publications like The Doller Stretcher instead of this book. That will save you some quality life time, too, which you could spend on cooking real food.